This will be about the year building up to diagnosis and my symptoms. I’m going to try and set the scene a little so bear with me! At the end of 2013 I decided to take a break from rugby and step down from the responsibilities of captaincy for the first time since I first learned how to run holding a ball……..just a week earlier. I lost my hunger for the game and needed a break. I have always played as many sports as possible although rugby took up the majority of my time and it has always been such a huge aspect of my life, my identity and my therapy! Its a religion.

I took a huge interest in health, fitness and strength & conditioning from an early age and went on to study Sports Science at college and university. Throughout school and college I always represented the county at rugby and athletics. I got picked for the Great British Bob Skeleton Development Squad during trials at college, selected for a Talented Athlete Scholarship Scheme (TASS) and other high performance schemes and even represented the south west for volley ball at the British Colleges Championships so sport, health and fitness has always been my life.

Now the reason I haven’t got an Instagram account plastered with photos of me training is because it has always been a way of life and I’ve always been busy training! I have always trained because I love it and for my sport. Looking and feeling good were not goals but benefits. The gym for me is a place to thrash myself and work hard to improve. The only time my phone was ever allowed in with me was to use as a timer. Over the past 3 or 4 years gym culture has changed with social media and now people feel the need to let the world know they work out. I don’t like change and I cant stand narcissism. Since school I have been training pretty full on and never felt the need to take a photo of myself doing it. Now I’ve started a blog, that will hopefully progress onto recovery and fitness post cancer, this might inevitably change a little and the odd picture of my progress may be used. #fitfam and all that bollocks.

So as I was saying I was in limbo not playing rugby, confused with what to do with all this spare time on my hands, it was so new to me! For the first time in my life I had no more Friday nights resting and packing my kit bag, no more rugby training taking up my week as well as the gym, Saturdays free to myself and no more Sundays waking up feeling like I had been hit by a bus, although that feeling stuck around for longer the older I got. I was enjoying keeping my fitness up with no weekly knocks and niggles and no pressure of games.

Through my work (medical sales rep) I have private healthcare and decided to take advantage of the time away from rugby and have a foot operation to fix a lifelong issue that had always held me back. I had the operation in September 2014. To rub salt in the wound my house mates and brother went on a two week holiday to Thailand just as I started the tedious 6 weeks in a cast, not allowed to put any weight whatsoever onto my foot so the tendons could re-attach. Waving them off from the sofa with my foot raised was worse than a kick in the balls. I was forced to rest which I can’t stand but would have to learn to accept. I filled my time with box sets, homing my hopping skills while not spilling tea and learning how to play the guitar….I’m still trying! While I was forced to sit at home I thought it was a good time to rest a shoulder injury that had been aggravating me in the gym for about 5 months! Whenever I did a pull up it felt like I was being stabbed in the shoulder, so I was forced to swallow my pride and use the assisted pull up machine for the first time ever, ouch. Any type of heavy shoulder press, snatching and overhead squats were almost impossible but I tried to work around it with lighter weight. I was also woken up in the night a few times with a ridiculous amount of pain and had to roll around on a hockey ball to try and relieve it or just rock back and forth, sitting on the end of the bed breathing like a lunatic and popping pain killers till the pain past. Being a bloke and a rugby player I just put the pain down to an old injury or a trapped nerve like anyone would!

A month down the line I was underway with physio for my foot and hugely relieved to be back into training even though it was slow progress. Once I started to get over the operation I thought I would see a specialist about my ongoing shoulder pain which had now got worse with rest. I put that down to the amount of time I spent sprawled on the sofa. I told the specialist the problem and he waved my arm about a bit with no issues. Puzzled he sent me off for an MRI.

Just before Christmas 2014 I had the MRI in which they injected dye to show the blood vessels up. MRI machines are pretty loud and they ask you what type of music you want to listen to….I’m not fussy I said. The first song was my brother’s band, The Leggomen, a great band but boy was sick of hearing them 4 times a week! (sorry lads) I had to try and not shake from having a chuckle to myself while passing through this claustrophobic time machine. After the scan the Dr came straight out and told me I needed to come back for a second MRI as the dye affected it. They wanted me back next week, I asked to postpone it another week as I was going away on boxing day for New Year and wasn’t concerned about the issue.

A couple of weeks later I was back, different date same shit except this time no dye injection and this time I chose Michael Buble, now that’s MRI music. The nurse asked me to come to the Drs office afterwards. He showed me the scan straight away and I immediately thought, oh shit this isn’t normal. He showed me a lump about 9cm big at the top of my right humorous and said “I don’t want to worry you but you need to get that checked out by a specialist as it could be serious”. Now cancer wasn’t even on my radar, serious like an old rugby injury that I had ignored and exacerbated maybe. I went away slightly concerned but not that bothered as I was confident it was just going to be a cyst or something like that. I’m young, fit and healthy so it’s nothing serious I right….

So this was a bit of a shit year on the whole. I was enjoying the break from rugby but also missed it and felt like I had lost my identity a bit, I needed something new to focus my energy on. Going from one big operation that had set me back and now straight into another issue. 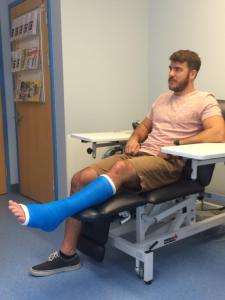 Getting my cast changed September 2014 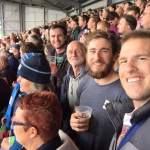 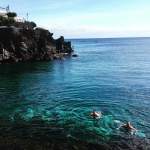 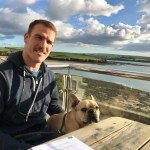 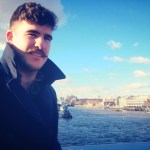 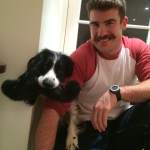